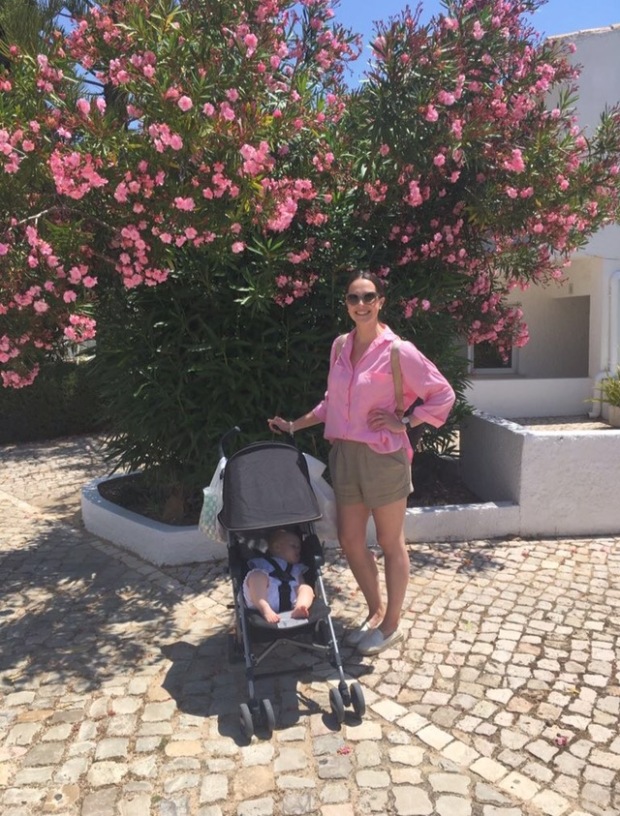 Ok so let me start by throwing out that good old phrase “age is just a number” because the point of this story really depends on what stage your baby is at – it has nothing to do with age as every baby is different.

Let me give you the low down on Lily. She rolled at 14 and a half weeks, crawled at six months, climbed the stairs at 8 and a half months and she was standing unaided at 9 months!!! I’m exhausted just typing it all. My point being is she has ALWAYS been on the go. Once she masters one thing she’s on to the next. She’s so strong minded & determined, Little Miss Independent, so it was no surprise that she took her first steps in the first week of us being away. In fact this is something we predicted would happen so my mind was ready for it. But I’ll tell you what…my back wasn’t!!

So whilst Daddy was playing for England in the Seniors World Cup in Thailand (which they won btw woop woop) my Mum, Lily & I were in Portugal for the same two weeks. 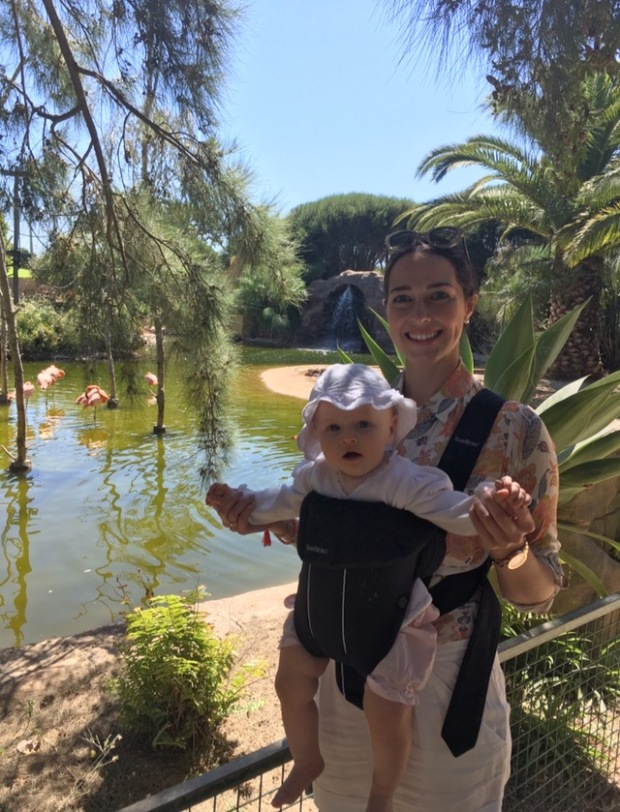 Zoo de Lagos – we loved it so much we went back again in our second week!

The weather in our first week was perfect, 24 degrees so lovely & warm but not stinking hot. Thank goodness as my poor baby was starting getting four top teeth through at once. Yes four. All at once.

Well I can honestly say it was the hardest week since she was born. I was awake every hour in the night with her little cries of pain (heartbreaking) and my poor Mum was awake all through the nights too worrying about her baby (me of course). So for the first week we were like walking zombies.

Now I’m a very patient person and as you may have guessed I adore being a Mummy and I adore Lily but with this round of teething came this day-time squealing whenever she couldn’t have something she wanted, when I took something (like my iPhone) off her or when I walked away. I couldn’t go to the toilet alone or she would start screaming. And I don’t know why but my brain just couldn’t deal with the squeal! It was like my brain was going to implode. Obviously it didn’t help that I was lacking quality sleep…big time. So the only thing to do was to walk. Lily LOVES being in her carrier and thank goodness for that invention.

The plus side of carrying her for 3-4 hours a day was that I was able to eat half a pack of Oreos (they’re dairy free!) on a daily basis & not gain weight #winner.

Ok so this baby wearing was all well and good in week one but it was a whole different story when the temperature reached 32 degrees in week two. I’m sweating thinking about it.

So Lily was now feeling better in herself but what to do with a very mobile 9 month in that kind of heat. We tried the pool but only twice in two weeks as this was the beginning  on June and the water in the adult pool was still absolutely freezing. I couldn’t cope. We braved the children’s pool which was slightly warmer but my gosh bouncing a 9kg baby in and out of a foot of water is back breaking. 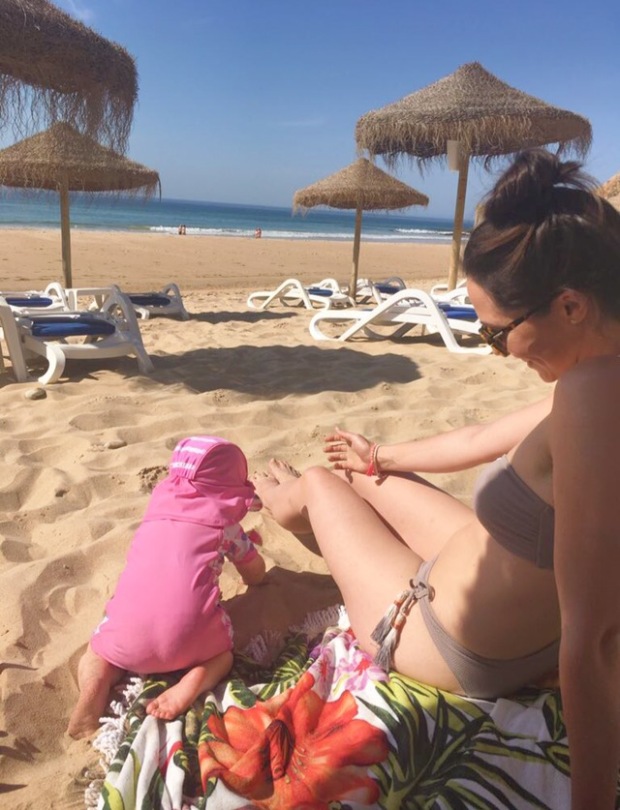 We tried the beach a couple of times and Lily loved it! She was so happy playing and splashing around in a little pool of water which I called the “dwelling” which Mum thought was hysterical. It was all going great until Lily The Explorer put sand in her mouth.

Time for a new plan of action! 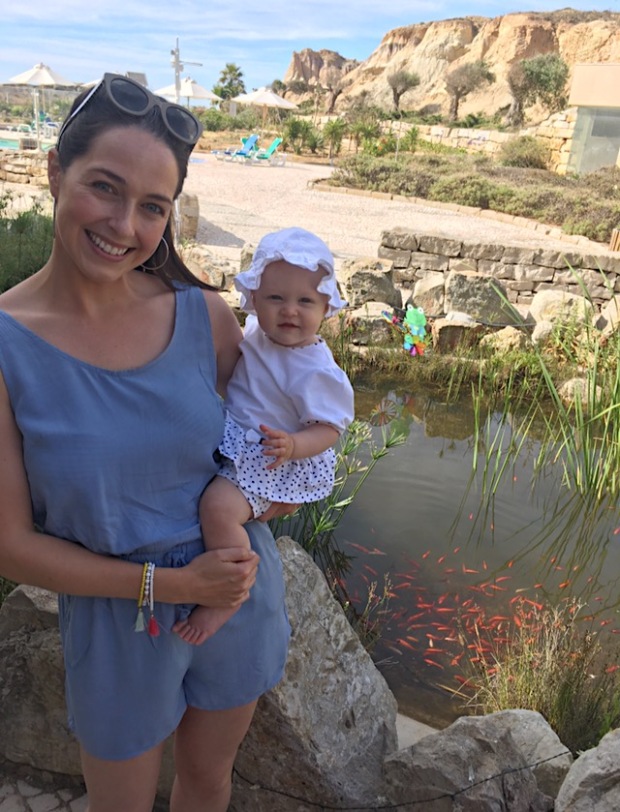 Mum & I decided that instead of having breakfast in our apartment we would make the most of the cooler hours of the day and go out for breakfast & lunch and then come back to the apartment for a couple of hours in the afternoon for some air con time. This worked well for us and we had breakfast most days at a little place just at the end of the road where they had a fish pond with Coy Carp, terapins & frogs – Lily was mesmerised by it. Perfect entertainment whilst waiting for our food to arrive. 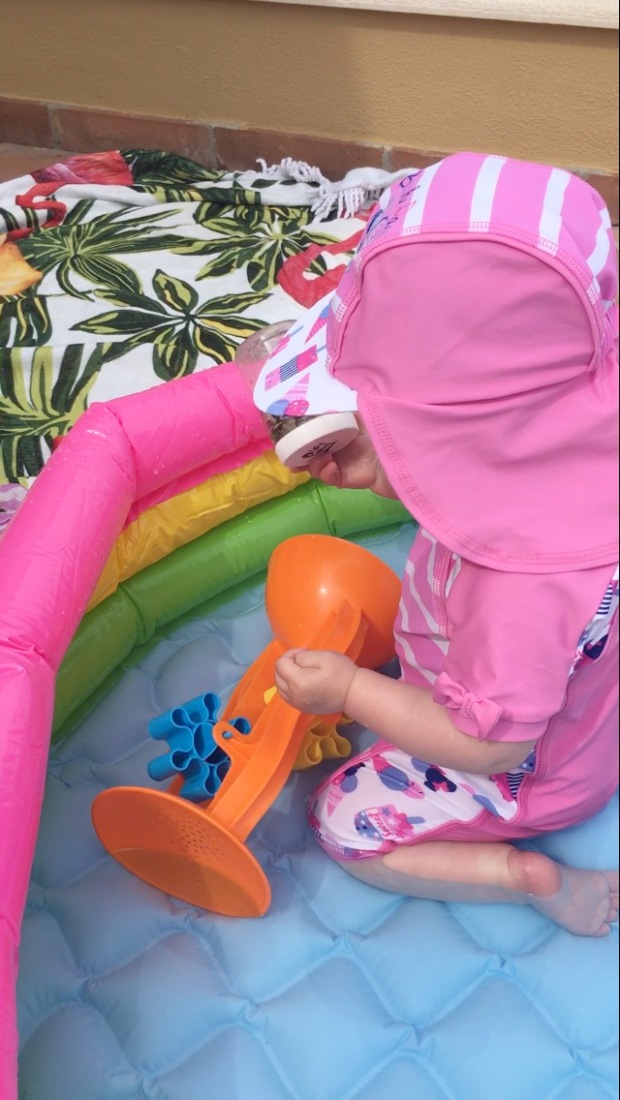 Fun in the paddling pool

Our new schedule teamed with a paddling pool on the balcony (blown up using my own determination & breath) worked a treat and the second week flew by.

Not the most relaxing holiday but we made some lovely memories.

Here are some general tips for travelling with a baby;

1. Take a baby carrier. We have The Babybjorn classic which is I think is cheapest at Mothercare http://www.mothercare.com/front-carriers/babybjorn-baby-carrier-original/LD2440.html?dwvar_LD2440_color=City%20Black&cgid=car_babycarriers_front#start=1
2. (My friend’s top tip) Take a little goody bag of ‘new’ toys on the plane with you. I say ‘new’ because that doesn’t mean you have to go & buy new toys, our friend kindly lent us some toys that her little girl no longer plays with
3. (Grandma’s top tip) Give your baby sips of water or feed them on takeoff & landing so that they swallow and their little ears don’t pop. I’m still breastfeeding Lily so I put her there each time & this worked well for us
4. Invest in a good buggy that has a hood that shades the majority of the baby. We went for the Silver Cross Zest as it was the only one I could find for a reasonable price where the hood covered Lily’s whole body just the bottom of her legs & feet would stick out
5. Find somewhere that does good coffee!